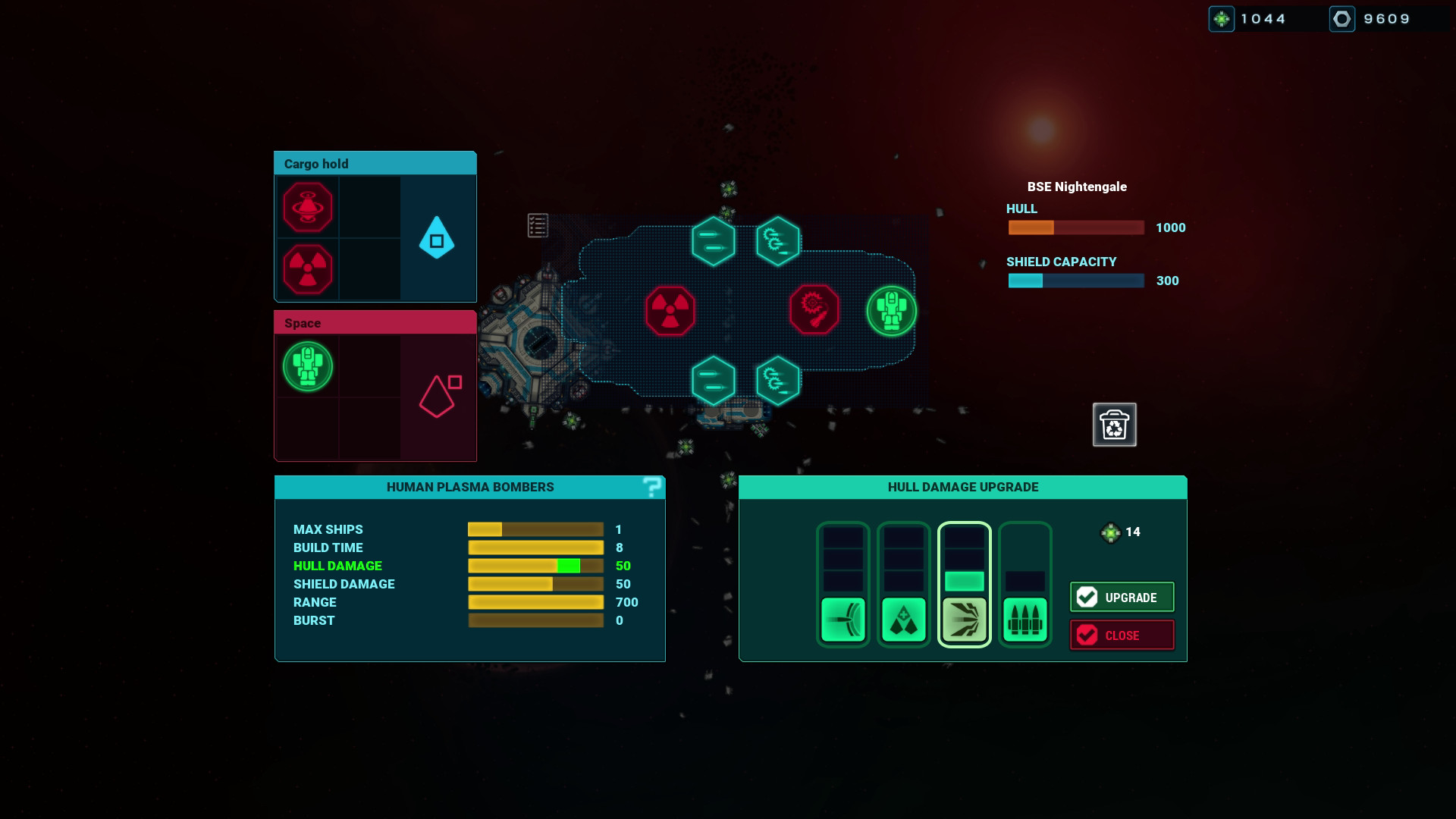 If you loved the exploration and freedom of games like FTL: Faster Than Light, but would love to get your teeth stuck into something a little more challenging, then look no further. Action roguelike Battlevoid: Harbinger has arrived and ticks all those boxes. So, arm your ships with a plethora of weapons and modules, assemble your fleet and prepare to storm enemy territory in this difficult yet surprisingly addictive little title.Story

You are a young commander tasked with defending humanity and exploring dangerous stretches of enemy territory. You are far away from home and must act carefully, or the next hyperspace jump could very well be your last.

Each time you play Battlevoid Harbinger, you will be given a randomised storyline explaining which alien race you are facing, their traits and goals, and why they must be defeated. You may get anything from a female only race, which kidnap humans for breeding and slavery, to The Matrix style machines which want humans to plug into their neural network. The storyline you get effects your victory goals and the aesthetic of some of the ships that you encounter, but they are otherwise interchangeable.The only other real story elements are missions which can be picked up from friendly space stations. They are something of a gamble and whilst fun, the storylines of “take this item to that location” or “guard this ship” are not the most engaging.

As you might expect from a title that was ported from a mobile game, the graphics were never going to be photo-realistically incredible. However, despite being simple, the graphics are actually excellent.

You can watch space battles unfold in real time, with lasers, bullets and missiles wreaking destruction across the screen. Watch your shields light up to block incoming damage, and your drones zip past to take on enemy ships. It’s all great fun to watch, and with Battlevoid’s permadeath mechanic, you will be on the edge of your seat every single time that things start to look a little dicey.New weapons and add-ons for your ships are all immediately visible from the outside, each with their own unique look, which is a really nice little detail to include. Backgrounds are all quite varied, and although you might argue that creating backgrounds for deep space isn’t terribly difficult, there is nevertheless enough variation and different engaging backgrounds to prevent things from feeling stale, even after hours of gameplay.

The music and sound effects are all surprisingly well done, with the battle sounds in particular deserving a mention. Prepare your ears for a flood of projectiles thudding against shields, the whine of lasers and the roar of engines. All of which serve to immerse you in the game and the fate of the battle taking place before you.Gameplay

Battlevoid Harbinger is a tough sci-fi roguelike, that blends exploration with real time battles and turn based strategy. Starting with a randomised amount of money and XP, you must buy weapons, add-ons and more, before heading out to take on the galaxy. There is a nice little tutorial which fills you in on some of the basic elements of the game, but you soon realise that it barely scratched the surface and you have to work out most things for yourself.You can buy normal human weapons at any time if you have the money, but you will need to trade with allied space stations or find goodies dropped from encounters if you want more unusual weapon types and items. The most common way to pick up new modules for your ships is to find and open containers out in space. These often turn out to be traps which temporarily cripple your engines or attract the attention of enemy ships, but it’s usually worth it to pick up some sweet free gear.

Despite being a very laid back and casual game, Battlevoid Harbinger is actually very difficult. The easy mode for example, is not easy. It will probably take you several attempts to even come close to beating the game on easy. How much money and xp you start off with is random, meaning sometimes you are doomed from the start. Other times you will fly naively into your first encounter, tooled up and ready for action, only to find yourself facing an incredibly strong ship at random. Which then proceeds to utterly annihilate you. These RNG elements, added to the fact that deaths are permanent, make some playthroughs incredibly frustrating.You soon discover that heading for any of your objectives quickly, without building a powerful fleet, immediately results in your death and a game over. As a result, much of the game is jumping from system to system protecting allied space stations and destroying enemy ships, trying to earn enough money to buy new ships and weapons to outfit them with.

When choosing where to travel to, you see a rough scan of the system which shows the location of any friendly or enemy ships and stations. You can also choose exactly which quadrant you want to arrive in. This is a nice mechanic that allows you to strategically dart in and take down any ships that might be off on their own, before the rest of their allies arrive. You can also set your own traps by using enemy distress beacons to lure their ships in to where you and your allies are waiting.Whilst you may miss the crew and event mechanics of landmark games like FTL, it is in these strategic elements and incredible real-time combat where Battlevoid really shines. You may find yourself rage quitting when things go against you, but it’s the space battles that keep you coming back over and over. 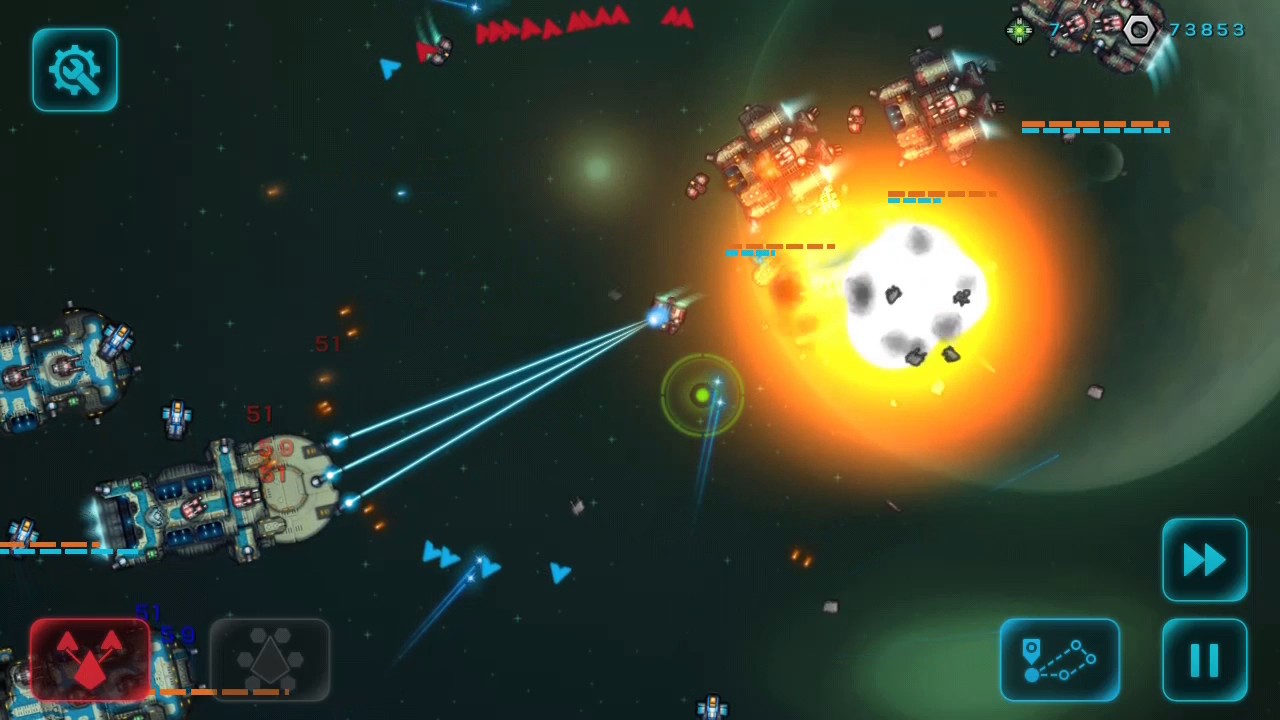 As it was originally a mobile game, which is most evident in the design of the interface, it would be easy to dismiss Battlevoid as yet another underwhelming mobile title brought on to Steam. To do this, however, would be a mistake, as you would miss out on a fantastic though sometimes infuriating little game. Whilst it might not quite live up to some of the standards set by games like FTL, Battlevoid Harbinger excels in others, creating a space combat system which far outclasses similar titles. It is not without its flaws, but is nevertheless an excellent and challenging game for a reasonable price, and well worth picking up.

Under Falling Skies – Board Game Review
Chronos: Before the Ashes (Switch) – Review
Gym Tycoon – Preview
Dyson Sphere Program Releases New Trailer With its Kickstarter Campaign About to Reach its Goal