A downloadable visual novel for Windows, macOS, and Linux

Star Wars Episode 1 bottom arch Apron sold as is ( 2 of ) Excl. Tax: AU$50.00 Incl. Tax: AU$55.00 Out of stock. Episode 1 of the visual novel series, 'Spare Parts.' Lucy's fresh out of her parents' home and looking for a foothold to start the rest of her life, but with no experience and only one friend, she's having trouble finding a job. That is, until she stumbles into a shop run by a mysterious woman who, for some reason, hires her on the spot.

Lucy's fresh out of her parents' home and looking for a foothold to start the rest of her life, but with no experience and only one friend, she's having trouble finding a job. That is, until she stumbles into a shop run by a mysterious woman who, for some reason, hires her on the spot. Unable to keep her nose out of others' business, Lucy finds herself caught in a much more complicated position than she bargained for.

The beginning of a story about the long struggle for a peaceful life, and the parts of ourselves we must sacrifice to make it there. 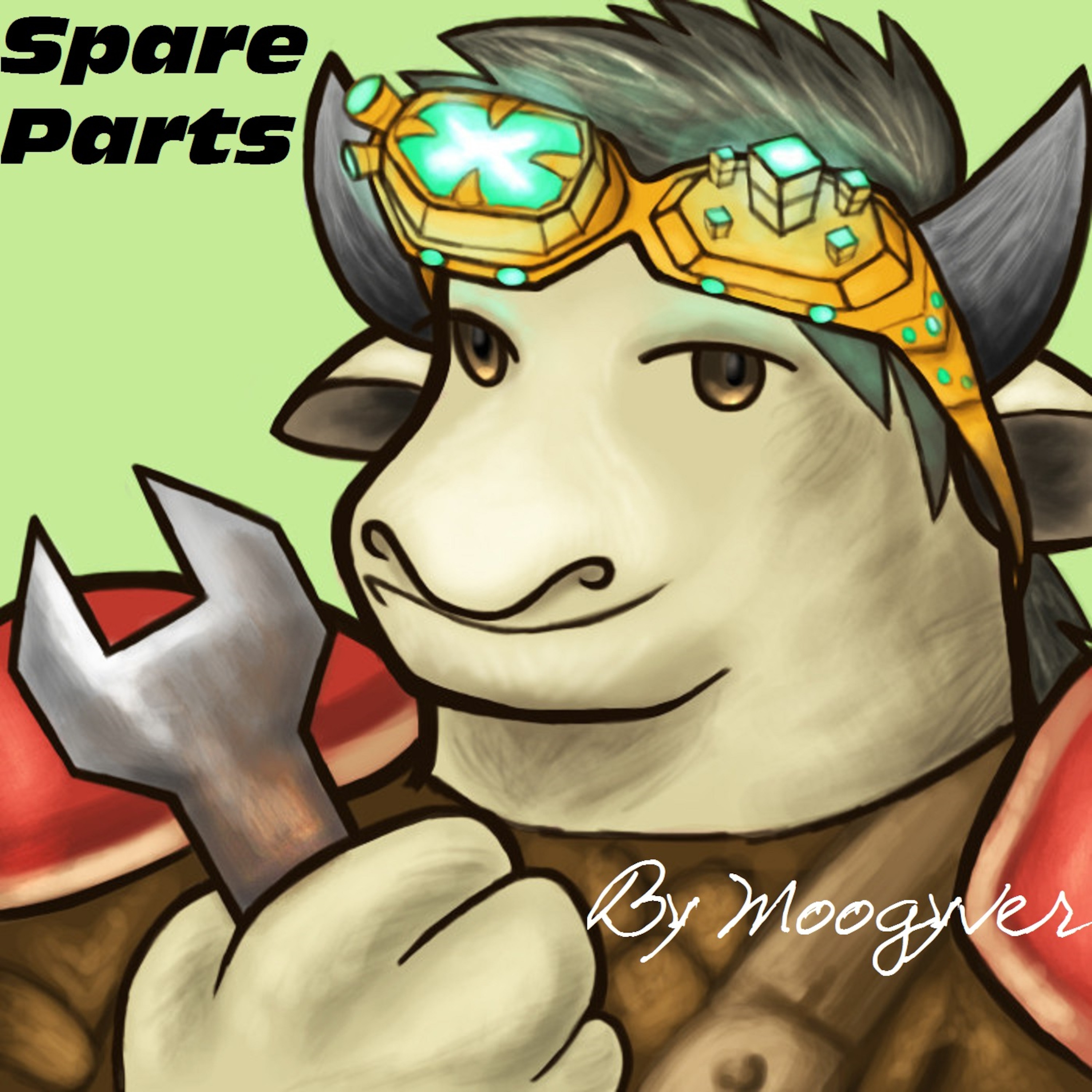 (There is a known issue with some machines where the default Ren'Py renderer, OpenGL, causes some hitching and stuttering. If you notice even very minor issues, please try: Shift+G, and change 'default renderer' to 'Force Angle/DirectX Renderer.')

I really like the Lucy character, I feel like it could be me. Well, maybe she's a tiiiny bit too dumb but I see for what narrative purpose ^^'

A shame she couldn't have a feedback on her drawing yet :p

this is such a wonderful game, im already in love with all the characters... i hope we get to see more of 02 in the next episode and im excited to see more of the plot. the radio segment was also really fun, i love when games have those...

all in all a very good start for a genre that often struggles with those! cant wait for episode 2!

just finished this and wow! i loved this so much, and i'm really excited to see where the rest of this story is going to go!! as well as, uh, a little nervous based on that epilogue buT!!! i love these characters so so so much, and i think 04 is my favorite? they perfectly encapsulate the feeling of 'baby AI raised solely by anime' and i adore them so much, i can't wait to see more of them, as well as everyone else!!! thank you so much for making this wonderful game

Just finished playing through this and I loved every bit of it. The sprite animations and transitions add a lot, and I feel much love for all the influence from Ryukishi07's visual novels, like in the SP Radio segment! It all makes up such a wonderful experience for Episode 1. The characters were so well-written, like people I know from my own personal life, so I love them dearly already. Also your art style is adorable I loved every image. THE BLOWTORCH GAG WAS REALLY GOOD. Unit 01 is my wife. I can't wait for the next episode, take care of yourself and good luck!

There's so much fantastic writing here! And subtle characterisation! And cute definitely-not-robots!!! I am promoting this every way I can because the story deserves to see completion and the creators deserve praise and money for it :3

Oh! And I loved the extra radio segment at the end! It was a great way to wind down and process some of the big feelings in the main story. I appreciate it a lot.

This is really sweet and my heart aches for every single one of the characters. I love your writing!! Already excited for the next episode, though I feel like my brain has plenty to chew with this one.

IT'S SO GOOD OH my god i love it i canNOT wait to see more!! maybe i am but a sucker for both lesbians and robots but this has me in particular hooked. i will be here ASAP when the next episode drops!!

I really liked the first episode. The characters were endearing and you've set up a fairly good premise. I think my favourite part is the very serious faux-umineko scary bit with 03 followed up by Lucy still not realizing they're robots and 01 being like 'wow you really don't get it yet'

The art and music is really nice too, it all feels cohesive and easy to read and play. Good job! I linked it on my twitter as well so hopefully you get more players soon.

I really enjoyed this visual novel - the premise is super intriguing and I’m very excited to see where the story will go from here! You’ve got yourself a new fan. ;>

Hira Khan: “But ebola and camel pox together?”

David: “No, camel pox is made of DNA, ebola is made of RNA. The two split and went their separate ways over two billion years ago.”

Carlos: “Well maybe they’ve kissed and made up.”

It’s hard to imagine a worse viral combo. Ebola, one of the deadliest viruses on Earth, but doesn’t spread easily. Camel pox, spreads easily, but can be fought with a drug. What if the two connected, and the ebola got a free ride on the camel pox? You’d get a supervirus that spreads fast and kills faster, with no vaccine or drug to fall back on.

That’s the nightmare facing the NorBAC team in the double-bill premiere of Regenesis. People in the Toronto region are suddenly dropping like flies, bleeding inside their skin, and dead within hours. It looks like ebola, but it’s spreading and killing too rapidly. The NorBAC team scrambles to locate patient zero and contain the outbreak as best they can, while working to identify the virus that strangely resists identification.

The problem is that they can’t find a single trace of ebola in the virus. What they find is camel pox, which human beings normally don’t get sick from; DNA-wise, there’s no genetic information indicating the ebola gene is anywhere in this camel pox genome. The reason for this, they finally realize, is because the virus is a chemically synthesized gene — man-made, apparently for purposes of bio-terrorism.

That it’s man-made explains the mystery. The DNA recipe for ebola isn’t in the supervirus, because the same amino acids that make up ebola have been coded by an engineer with different DNA. As David Sandstrom illustrates to his boss in layman’s terms (I made a youtube clip of this little bit here):

“Whoever made this knew that we’d be looking for this:

Now we know what we’re looking for.”

Of course, that puts an uglier spin on an already disastrous situation. Imagine if Covid-19 was an act of bioterrorism. To be clear, it isn’t. That conspiracy theory was easily debunked. But the coronavirus has made us realize how woefully unprepared the U.S. would be for a biological attack. As we approach the peak of the Covid-19 pandemic, the scenarios presented in Regenesis don’t seem like science fiction.

Patient zero turns out to be a baby (Miranda) who has been on a road travel with her mother (Daisy). They are both quarantined with a bus load of passengers when the woman sitting next to Daisy starts bleeding from her mouth. Miranda has what appears to be a sore throat, but nothing beyond that, and Daisy is perfectly fine. When tests are run on Miranda, the results are startling. The baby’s throat cultures are filled with RNA, causing the NorBAC scientists to wonder what it’s doing in the middle of her DNA.

David figures out the RNA in the baby’s throat is siRNA — “small interfering RNA” — which is RNA that kills viruses in plants, though it’s in people too. Somehow the siRNA has been engineered in Miranda’s throat to make her immune to the supervirus that she’s been given. In other words, she has the virus but can’t get the disease. Her mother Daisy is also immune, because of a procedure she was given while Miranda was still in her womb, which exposed her to the virus.

Daisy is wholly ignorant of this, having no idea that Miranda was engineered to be a bio-weapon, and she certainly can’t believe that her finance (now in England) is anything other than he claims to be. When Caroline and David present the truth to her, it’s a bit hard to watch. Regenesis isn’t a show of happy endings. Miranda has to be quarantined for the rest of her life, and Daisy will never see her baby again. And the quarantine will go on for quite a long time in Hazmat City.

Around the terrifying plot of the Miranda Virus is the sidebar of Mick Sloane, a 15-year old kid who is dying and thinks he’s a clone. Played wonderfully by a young Mark Rendall, Mick has read David Sandstrom’s science articles and worships him as a hero, and begs him to save him from dying. David (in his usual asshole way) shits all over Mick, dismisses the kid as a mental case, and tells him that clones are impossible.

Having no luck with his hero, Mick starts stalking his daughter, played by a young Ellen Page. At first she tells Mick to get lost (and like her father, to get psychiatric help), but eventually the two become friends. She starts to believe there may be something to his claim about being a clone, because he has the birth certificates to prove that he and his brother Cal were born two years apart (and thus, he says, they can’t be identical twins), and that his mother died before he was born (and thus that he must be a clone who was born in a lab).

And if there’s anyone who could have created a clone in the year 1990, it would have been Mick’s father — the brilliant scientist Shelby Sloane, who has butt heads with David Sandstrom in the past. Dr. Sloane apparently created Mick in order to save Cal, who was dying of bone cancer. Cal ended up dying anyway, and Mick (whose bone marrow was given to Cal) ended up with all sorts of medical complications (on top of being a clone, if that is true) that makes his own death imminent. He doesn’t have long to live, and that conclusion will play out long before the final episodes of season 1.

When I first saw Baby Bomb and Spare Parts, I thought they were a thrilling premiere to a cerebral TV series. They still are, but they’re more than that in the time of Covid-19. They’re quite educational — about viruses, genetics, biochemistry — and frightening. Regenesis was billed as a scientifically realistic series, and that realism gains added resonance as we quarantine at home and wear masks when we go outside.