Tyranny – Gold Edition, the ultimate Tyranny experience that includes every Tyranny Expansion and all additional DLC.

Experience a new chapter of Tyranny, the critically-acclaimed role-playing game (RPG), in Bastard’s Wound, a new expansion that builds upon the game’s compelling story. Delve deeper into the mysteries of Terratus as you bring Kyros' justice (or your own version of it) to a new corner of the Tiers. In addition to the new region, Bastard's Wound gives you a chance to learn more about your party in a trio of companion quests featuring Lantry, Verse, and Barik.

Tiers of the Tiers

Tales from The Tiers expands your journey through the war-torn world of award-winning role-playing game Tyranny, with new travel map events, encounters, and side stories. Outwit hostile ambushes, patronize or plunder traveling merchants, and use your skills to navigate the perils of a land plagued by magical Edicts in a series of episodes that offer new insights, new items, and new challenges on your journey.

Customize your Fatebinder with a selection of 20 new character portraits, providing new ways to portray your character’s look and feel.

The digital Tyranny soundtrack includes over two hours of music across 43 tracks, including the scores from Bastard's Wound and experimental music from the game's development.

Three notification tones and one ringtone

The soundtrack includes 18 tracks containing a total of 57 min from the game. 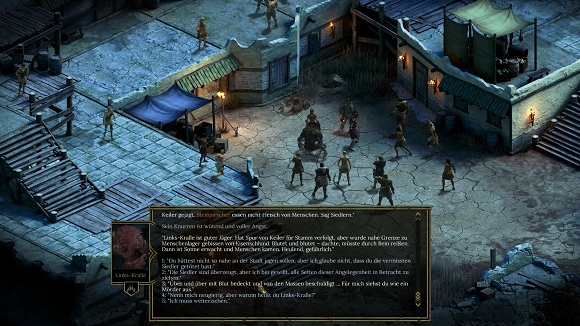 Adds 4 unique coat of arms to the Fatebinder’s selection of personalized war banners – show your allegiance with either The Disfavored, Scarlet Chorus, Tunon the Adjudicator, or Kyros the Overlord.

A rich digital collection of ten short stories from the world of Tyranny, giving readers a deeper look at the brutal world and powerful characters that live under Kyros’ rule. Written by the creative team behind Tyranny, these stories introduce several of the game’s companions and key characters. This collection includes three exclusive tales never seen before, alongside seven originally published on the official Tyranny website.

Add your desktop to Kyros’ domain with a selection of high-quality artwork from Tyranny, sized for PC desktops in high resolution. The collection includes ten different pieces from the Tyranny art team, including one signed by the developers.

Discover the lore and secrets of Tyranny in a comprehensive world guide from author John Helfers. Explore artwork from the game alongside the stories of the people and places of the Tiers, and discover the world that Kyros has brought to heel. Includes a foreword from Obsidian Entertainment.

Immerse yourself in the war-torn world of Tyranny in an extensive collection of original artwork.

Tyranny – Gold Edition is the ultimate Tyranny experience and includes every Tyranny Expansion and all additional DLC content. Experience a story-driven RPG where your choices mean all the difference in a world conquered by evil.

From Obsidian Entertainment, the team behind Pillars of Eternity, Fallout: New Vegas, and South Park: The Stick of Truth, Tyranny is a classic-styled RPG with a new and original story, shaped and molded by your actions. The very layout of the world will be altered by your decisions as you choose sides, make allies and enemies, and fight for your own vision of law and order in an immersive and reactive story.

Following are the main features of Tyranny Gold Edition that you will be able to experience after the first install on your Operating System.

Click on the below button to start Tyranny Gold Edition. It is full and complete game. Just download and start playing it. We have provided direct link full setup of the game.