They Got It right. Looked a bit touch and go there for a while, didn't it? While Dawn of War II was the best Frankensteinian gestalt of strategy and role-playing to date, there were only so many times that walking north up a map until you reached a circular bit with a slightly bigger Tyranid in it could remain entertaining and surprising. 'Oh! A big Tyranid! How did you know? Urn - did you keep the receipt?'

In Chaos Rising there's no more of that: missions are scripted, sculpted things, escalating fights packed with apocalyptically crumbling environments, a surprisingly engrossing story and a whole bunch of ethical choices.

Yes, your real-time strategy game now includes moral deliberation - which is a step forward for a genre that's usually about 'Shall I build this little man, or this other little man?' As you play the game, you can be careful, considerate and painstaking to keep your clutch of Space Marines pure, or you can grab and smash everything and hang the consequences, which duly corrupts your guys. The further they turn towards the Dark Side - sorry, Chaos - the more brutally cool abilities and perks they unlock. The trouble is they'll lose other abilities, and access to some rather tasty armour and weapons.

The best course of action depends not only on your own personal ethics (eg shall I take the long way, or slaughter my way through a bunch of my mates to get there quicker?) but also on your hunger for tasty powers and items.It's a clever balancing act, making it harder than you'd have thought to stick doggedly to one extreme. Better yet, it's genuinely woven into the story. There are twists, and they are splendid twists.

The major bullet point for this, arguably overpriced, standalone expansion is the return of Chaos and its Marines to DOW. These are a perverted take on Space Marines, who are more about punch than speed, and have a few demons thrown in for good measure.While Chaos Rising's single-player game is a revelation after DOW2, the multiplayer hasn't changed much - it's just enlarged significantly by the inclusion of Chaos and new units. It's a shame these missions aren't a bit wilder, but they fit well, and turn a game that could feel small into a big and beefy one. 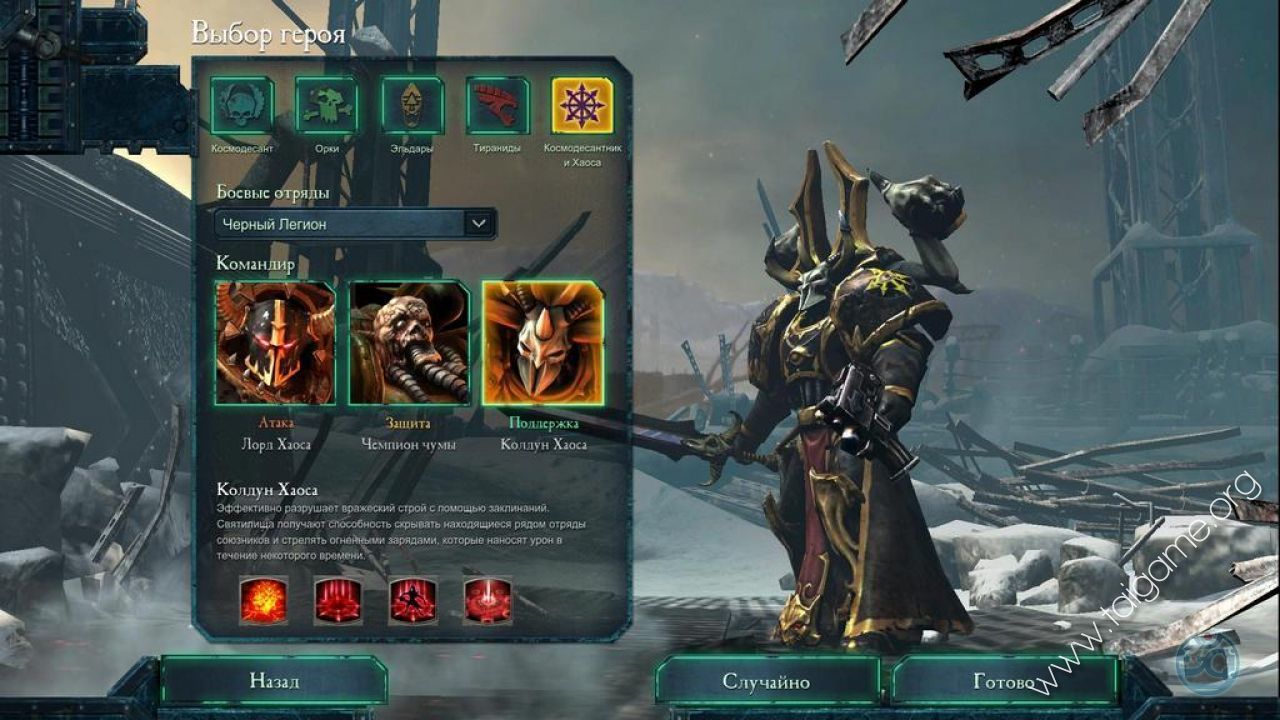 Best of all, Relic have dropped an enormous patch for Dawn of War II to ensure that the game's player base isn't split. Once applied to D0W2 players can face off with those playing Chaos Rising, without needing this expansion.

Chaos Rising a splendid next step for Dawn of War II, that avoids the easy route of simply fixing the last game or simply continuing on as before. It does both, and then some.

Welcome to the new generation of real-time strategic warfare. Warhammer 40,000: Dawn of War delivers a level of visual detail never before seen in an RTS. Hundreds of units clash on the battlefields of the dark future, unleashing massive destruction through a stunning battery of long-range weaponry before closing in for the finish. Incredible kill animations bring science fiction combat to life like never before, and the gritty future-gothic Warhammer 40,000 setting provides a striking tableau for the chaos and carnage of this grim, dark future, where there is only war!